Turkey's Coup Is Crushed, And At Least 160 People Are Dead 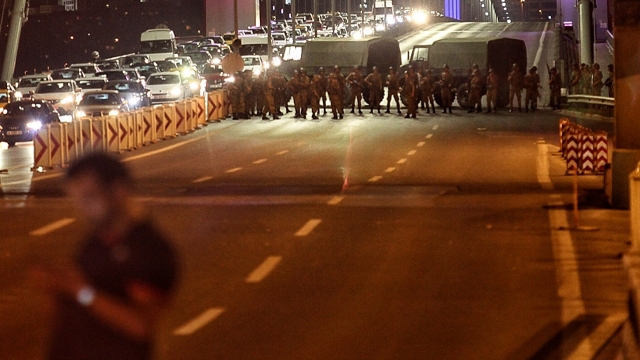 SMS
Turkey's Coup Is Crushed, And At Least 160 People Are Dead
By Ethan Weston
By Ethan Weston
July 16, 2016
At the end of the failed coup in Turkey, some military personnel are seeking asylum in Greece.
SHOW TRANSCRIPT

According to the country's acting military chief, the attempted coup in Turkey has been crushed.

Saturday morning Turkey's prime minister said the situation was under control and that all commanders were back on duty.

But CNN reports more than 160 people died in the attempted coup and about 1,140 people were wounded in a night of violence.

Coup forces attempted to seize control of various locations — including media outlets — overnight, but by morning, videos online showed soldiers surrendering. So far, more than 2,800 members of the military have been arrested in connection with the coup.

President Recep Tayyip Erdogan, who was forced to speak to media via Facetime during the coup, said in a statement: "The government is in control. Fifty percent of the people elected the President and that President is on duty."

It appears that a few military personnel fled to Greece in a helicopter to seek asylum. Turkey is already demanding the extradition of those officers, and Turkish officials are reportedly considering restoring the death penalty for the accused coup plotters.

This video includes clips from DHA, BBC and Haberturk and Getty Images.