Turkey Cracks Down After Failed Coup, Demands US Extradite Gülen 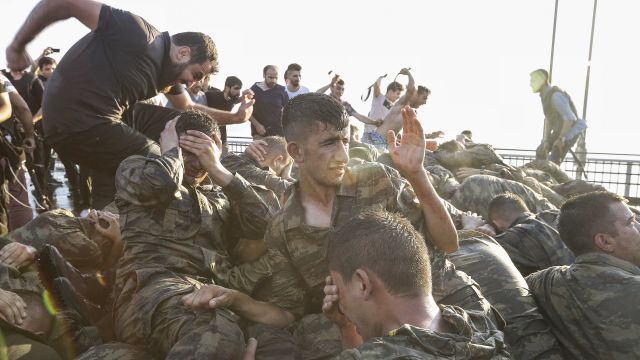 SMS
Turkey Cracks Down After Failed Coup, Demands US Extradite Gülen
By Matt Picht
By Matt Picht
July 16, 2016
Thousands of soldiers and judges have been arrested and accused of participating in the failed overthrow of the Turkish president.
SHOW TRANSCRIPT

The Turkish government is taking its revenge against the instigators of a failed coup attempt.

Almost 3,000 soldiers have been detained, including several of the country's top generals. Around 2,700 judges were fired as well after the country's judiciary board was purged.

Now Turkey has set its sights on the U.S. — President Recep Tayyip Erdoğan has demanded America hand over Turkish cleric Fethullah Gülen, who is currently living in Pennsylvania. Erdoğan has blamed the coup attempt on Gülen's supporters.

Surviving the attempted insurrection is likely to bolster Erdoğan's authoritarian tendencies — and his mandate to do so. The coup attempt was severely hindered by the massive crowds of ordinary citizens who turned out in the streets to support the government.

Turkey's government says 256 people, including 104 coup participants, were killed during the coup attempt, while more than 1,400 people were injured.

This video includes an image from Getty Images and clips from TRT Haber and Haber Turk.