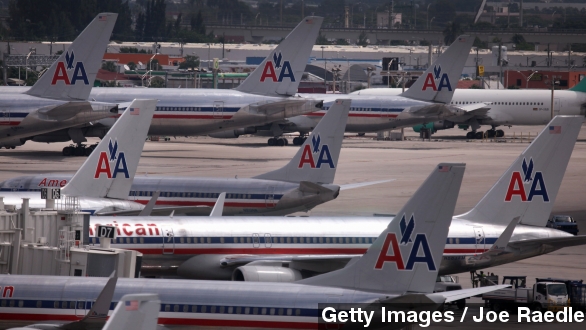 But for one American Airlines flight en route from Seoul, South Korea to Dallas, Texas on Tuesday.  (Video via KXAS)

"Plates, glasses, even a beverage cart were thrown around the cabin," KXAS reports.

The turbulence got so bad the flight had to divert to an airport in Japan.

Officials told ABC the shaking injured at least 14 people, five so severely they had to be hospitalized.

The plane was reportedly stuck in the rough air for as long as 90 minutes. KTVT spoke with passenger Marc Stanley.

“Not only had I not, the pilot — he’s been flying more than 30 years — the copilots, the flight attendants for 35 years, everybody said they’d never, ever, ever seen anything like this,” Stanley said.

Weather Channel meteorologists say a storm developing over Japan was the likely culprit.

“Around these jet streaks, especially around the front and the backs of them; that’s where you can get some of the most violent motion, especially while the storm is developing. You get a lot of rising air; you get a lot of sinking air.”

American Airlines said the passengers would spend the night in local hotels before boarding a new flight bound for Dallas on Wednesday.