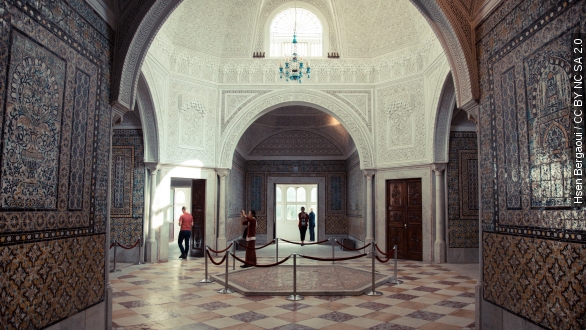 Tunisia's Prime Minister said Sunday morning authorities had killed the man suspected of orchestrating the attack on a museum in the capital that killed 22 people. (Video via Tunisian Television 1)

Security forces killed two gunmen during the attack but had said they were still searching for the suspects who planned it. (Video via SHEMS FM)

Sky News reports the suspect's name was Khaled Chaieb and says he was a member of Al-Qaeda's North African arm, despite claims by ISIS that it had organized the attack. (Video via Sky News)

It was a busy day in Tunis, the capital, with French President Francois Hollande visiting to pay his respects in a ceremony held at the Bardo museum, announcing that a fourth French national had died of her injuries. (Video via BFMTV)

The museum is a popular tourist destination, and in all, 21 tourists of at least nine different nationalities died in the attack. (Video via CBC)

An anti-terrorism march to the museum drew thousands of demonstrators, who the BBC reports chanted: "Tunisia is free! Terrorism out!"

But some factions boycotted the march, blaming the Islamist party Ennahda — a Muslim Brotherhood affiliate — for the attack and for fueling extremism. (Video via eNCA News)

In Tunisia, some analysts have linked the increased openness of society since the 2011 revolution with a decrease in security, arguing the removal of an authoritarian presence has come at the cost of increased terrorism. (Video via Al Jazeera)

A writer for Foreign Policy points to the presidential amnesty that came after the revolution as a possible cause, writing, "In tandem with the freeing of the prisoners, came the return of radical preachers who have since been tirelessly working to stoke the fires of religious dissent in poor neighborhoods."

Still, observers generally see Tunisia as a success story of the Arab Spring, and the country's presidential elections in November were peaceful. (Video via The Carter Center)