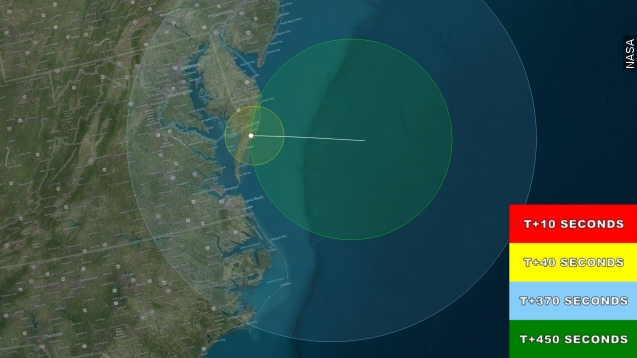 SMS
Tune In Or Just Look Up To See NASA's Latest Rocket Test
By Evan Thomas
By Evan Thomas
October 7, 2015
Rarely are NASA's equipment tests so pretty. If you're near the central East Coast on Wednesday, watch the skies for a colorful launch.
SHOW TRANSCRIPT

NASA's upcoming rocket launch is going to look even cooler from the ground than most of them — if that's even possible. (Video via NASA)

The rocket in question is a Black Brant sounding rocket, which, on its own, is nothing new. It's a popular vehicle for some of NASA's in-atmosphere tests. (Video via NASA)

These release tests will send out clouds of barium and strontium. The powdered metals give fireworks their bright colors, and will show up in the upper atmosphere the same way. (Video via Fire, Ice and Geoscience)

The rocket will cut its payloads loose at 130 miles up, or about six minutes after launch. Because the clouds are so high up, they should be visible up and down the East Coast.

If you live elsewhere, no worries. NASA will be broadcasting the colorful launch live on its website on Wednesday between 7 p.m. and 9 p.m. Eastern time. (Video via NASA)