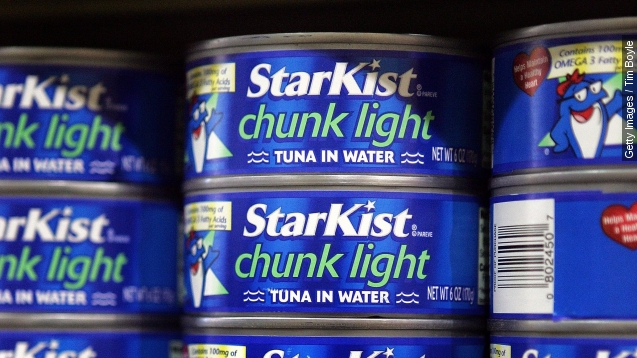 SMS
Tuna Payouts And Other Weird Commercial Lawsuits
By Evan Thomas
By Evan Thomas
August 28, 2015
In the world of commercial class-action lawsuits, settling in tuna is not as strange as you might think.
SHOW TRANSCRIPT

StarKist has settled a class-action lawsuit alleging it under-filled its cans of tuna, starting as far back as 2009.

Shoppers who were shorted several tenths of an ounce of tuna per can are now eligible to receive a payout: in cash, or in cold, hard tuna.

StarKist will pay out as much as $50 worth of tuna to affected customers. Assuming $1.50 a can, that could be 30-plus cans of tuna. Customers also have the option of receiving $25 in cash instead.

This is actually normal behavior in the food industry: Red Bull settled a similar case earlier this year, and paid out $10 in cash or $15 in the Red Bull drink of your choice. (Video via Red Bull)

And there are worse — or at least stranger — things than fish to receive as lawsuit payouts.

Class Action Rebates keeps a running list of payouts. Currently up for reimbursement: everything from cash payouts from Comcast and Transpacific Airlines, to 10 years of maintenance on qualifying Mercedes-Benz vehicles, to $5 worth of potatoes.

Now, a Mercedes is more valuable than a potato. So, yes, depending on what plaintiffs are claiming, sometimes you have to provide proof of ownership. But this isn't always the case. (Video via Mercedes-Benz)

That StarKist settlement, for example, does not require explicit proof of purchase of qualifying tuna products. Of course, if you have been saving your tuna receipts for the last five and a half years, you could qualify for a bigger payout. (Video via StarKist)

Affected customers can head to — yes — TunaLawsuit.com to file their claims.