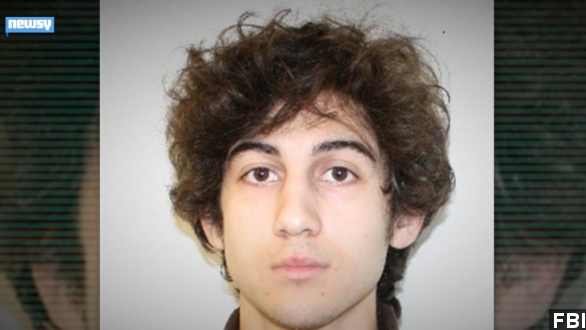 SMS
Tsarnaev To Face State Charges After Federal Trial
By Cliff Judy
By Cliff Judy
March 19, 2015
Massachusetts prosecutors will pursue state charges against Dzhokhar Tsarnaev for the death of Officer Sean Collier in a shootout after the Boston Mar
SHOW TRANSCRIPT

Even in the unlikely event a federal jury fails to convict Dzhokhar Tsarnaev for his alleged role in the Boston Marathon bombings, state prosecutors in Massachusetts announced Thursday he'll face other charges for the killing of an MIT police officer in the days that followed. (Video via The Boston Globe)

Prosecutors say Tsarnaev and his older brother, Tamerlan, killed Officer Sean Collier in a shootout in the Boston suburb of Watertown four days after the bombings. (Video via WFXT)

Tsarnaev is currently on trial in federal court for the bombings, and witnesses have already testified about Collier's murder. If convicted, he could face the death penalty. Prosecutors said these state charges announced Thursday would proceed after the federal trial.

Tsarnaev's attorneys have all but acknowledged he'll be found guilty in federal court and have already begun framing a defense strategy based around painting the elder Tsarnaev as the mastermind behind the bombings. It's widely interpreted as a move to spare Dzhokhar Tsarnaev the death penalty.

As far back as 2013, state prosecutors said they'd eventually file this charge. At the time, they explained while allegations over Collier's murder were included in the federal case, the feds didn't specifically charge Tsarnaev with killing Collier.

This video includes images from Getty Images and the FBI.