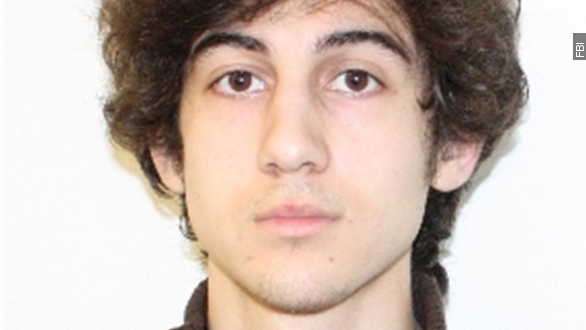 The sentencing phase of Boston Marathon bomber Dzhokhar Tsarnaev's trial began Tuesday, with the prosecution trying to convince the jury to choose the death penalty.

In its opening statement, the prosecution revealed a photo, shown in this court sketch, which showed Tsarnaev in his jail cell three months after the attack giving a security camera the middle finger.

The New York Times reported a government prosecutor said: "This is Dzhokhar Tsarnaev, unconcerned, unrepentant and unchanged. ... Without remorse, he remains untouched by the grief and the loss he caused, and he remains the unrepentant killer."

Then, after showing the photo, people who were injured in the bombings or lost loved ones took the stand to tell their stories.

This is all part of a push from the prosecution to prove that Dzhokhar Tsarnaev wasn't just following the orders of his older brother, Tamerlan Tsarnaev, but was a full partner in the plot that led to three deaths and more than 260 injuries.

That's something for the jury to consider while deciding whether Dzhokhar Tsarnaev will get life or death. The jury would have to vote unanimously for the latter.

Before he was found guilty, Dzhokhar Tsarnaev's defense argued that he was pressured by his older brother — who they claimed was the real mastermind — saying, "If not for Tamerlan, it would not have happened."

On April 8, Dzhokhar Tsarnaev was found guilty on all 30 counts for his role in the bombings. Seventeen of those counts carry the death penalty.