Tsarnaev Death Penalty At Odds With Mass.'s View Of Justice 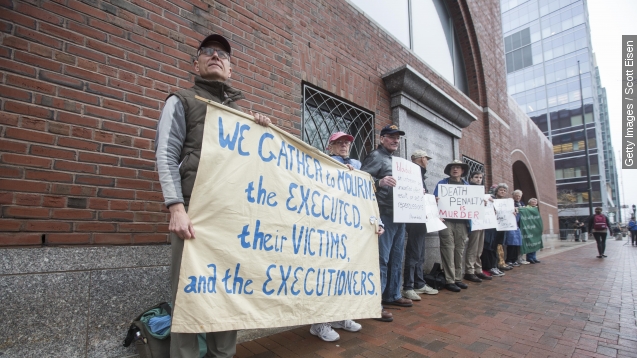 A jury gave Boston Marathon bomber Dzhokhar Tsarnaev the death penalty for his role in the 2013 attack.

In Massachusetts, that death sentence is pretty out of the ordinary. It's a blue state that hasn't used the death penalty since 1947 and banned it in 1982.

But the state's death penalty ban doesn't apply to federal cases. So, one of the requirements to serve on the jury was potential jurors had to support the death penalty. (Video via WHDH)

That makes sense, because the sentence had to be unanimous. One anti-capital punishment juror would have completely ruled out the option. But it also led some to question the fairness of the trial.

Jon Healey wrote in the Los Angeles Times, "the restriction nevertheless tilts the pool, effectively putting Tsarnaev's fate in the hands of people who didn't reflect the broader Massachusetts public's reluctance to sentence people to death."

How reluctant is the Massachusetts public to sentence people to death? Nearly a third of Massachusetts residents say they support the death penalty for egregious crimes. But a Boston Globe poll last month found less than 20% believed Tsarnaev should be put to death.

"So in essence they're choosing jurors from a pool of a minority of the state's population and probably a minority with a fairly distinct sort of political profile," Masha Gessen told PRI's The World.

Although that group is a minority in Massachusetts, it is a majority in the U.S. where 60% of Americans favor capital punishment for convicted murderers. And this was, after all, a federal trial, not a Massachusetts trial.

Following the ruling some victims and their families expressed relief.

"I have to watch my two sons put a leg on every day so I mean I don't know if closure but I can tell you it feels like a weight has been lifted off my shoulders," said Liz Norden.

Tsarnaev will now be formally sentenced by a judge, probably sometime this summer. A criminal defense attorney told WBUR in Boston, "there will certainly be an appeal."

Correction: An earlier version of this video misstated the state in which the trial took place. The video has been updated.