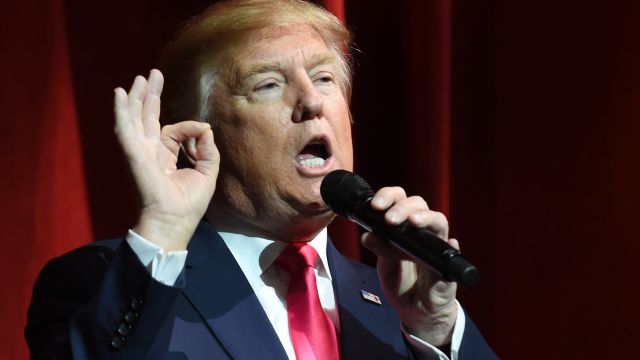 SMS
Trump Visits Black Church With A New Tone For His Same Old Pitch
By Matt Picht
By Matt Picht
September 3, 2016
Donald Trump hit on all of his usual talking points during the visit.
SHOW TRANSCRIPT

Donald Trump visited Detroit's Great Faith Ministries International church on Saturday to deliver one of his strongest attempts yet at black voter outreach.

"The African-American faith community has been one of God's greatest gifts to America and to its people," Trump said during his speech.

By Trump standards, these remarks were downright presidential. He stayed on script, spoke reverentially about the black church and managed not to say anything overtly inflammatory. It's a marked improvement over his previous pitches.

"What the hell have you got to lose?" Trump asked black voters at a rally last month, trying to persuade them to vote for him.

But despite the shift in tone, Trump's core pitch remained the same as it always has been: America is losing jobs and security, and he's going to bring them back. Trump didn't focus on issues specific to African-Americans, saying instead he was there to listen to the community.

This pitch might not stick. Outside the church, Trump's visit was marked with a protest from those who've heard his past rhetoric and have already made up their minds about him. Even some people inside the church were left skeptical.

"He had a nice presentation. It was clear and concise. Now the big question is, is it real?" Detroit resident Verzell Page told MSNBC.

Trump last took a stab at diplomatic outreach when he visited Mexico earlier this week. Less than 24 hours later, that approach vanished into a fiery immigration speech which reassured his base but alienated the voters Trump was trying to reach.