Trump's Mexico Visit: What You Should Know About President Peña Nieto 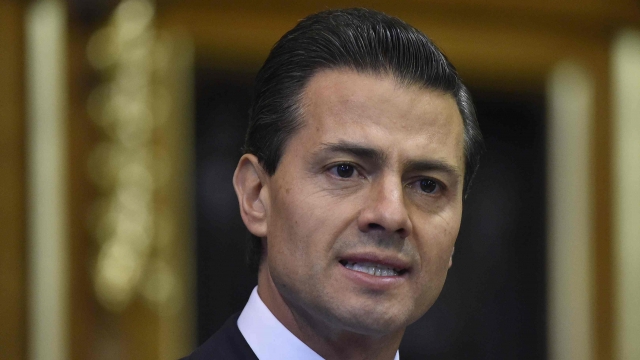 Donald Trump announced Tuesday he would travel to Mexico to meet with the country's president ahead of the GOP nominee's highly anticipated immigration speech on Wednesday.

So who is the man the Republican presidential nominee is meeting with?

The 50-year-old took office in 2012. He has a 23 percent approval rating, which could be due to several controversies.

Peña Nieto apologized in July for a scandal involving his wife's purchase of a luxurious $7 million home dubbed "Casa Blanca," or the "White House," from a government contractor in 2014. His wife is a former singer and telenovela actress.

Despite Guzman's recapture, Peña Nieto has had his work cut out for him. According to Fox News Latino, the country saw a major increase in homicides in Peña Nieto's first two years in office, compared to his predecessor's.

His handling of the disappearance and presumed killing of 43 students in 2014 has also been criticized.

According to a Pew Research Center poll from last year, the majority of those polled disapproved of Peña Nieto's handling of corruption — which he vowed to address — as well as crime and the economy, among other things.

Peña Nieto is a member of the Institutional Revolutionary Party, which has also seen its approval ratings suffer during his presidency.

When asked in June about Donald Trump's seemingly "anti-immigrant" and "anti-Mexican" statements during a joint press conference with President Barack Obama and Canadian Prime Minister Justin Trudeau, Peña Nieto said the three leaders addressed Trump's comments. He also said he was prepared to work with whomever is the next U.S. president.

"The best way to reinforce the progress and agreements that have been made so far is to explain clearly and let the people feel the beauties and benefits of all the work we do," he said, according to a translation.

He told CNN in July there is "no way" Mexico would pay for Trump's proposed wall on the U.S.-Mexican border.