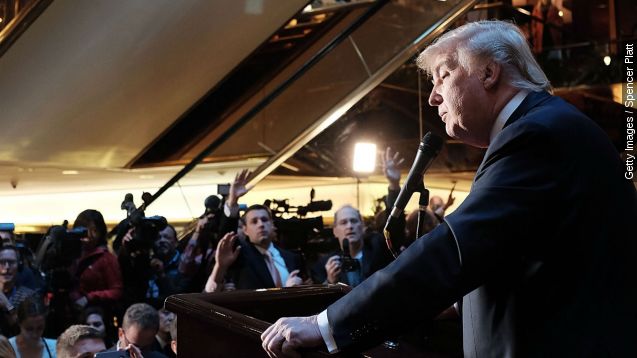 The presidential candidate spoke about his new book, titled "Crippled America," to a crowd at Trump Tower. But he apparently doesn't look too kindly on similar acts of self-promotion from his GOP rivals — Dr. Ben Carson in particular.

If you scroll through Trump's Twitter, you'll see some tweets promoting his book signing, along with some retweets shaming Carson for taking time out of his campaign to sign his book.

But promoting his book doesn't seem to be hurting Carson's "suspended" campaign. Thousands of people have shown up for his tour for "A More Perfect Union."

So even though Carson "suspended" his campaign for a couple of weeks in October, he's actually doing better than before he started his tour.

In fact, recent polls show Carson is closing the gap or even beating Trump, who has long enjoyed a wide lead over the other candidates.

With declining poll numbers, Trump could use a similar boost from his own book signing.

"Crippled America" is Trump's 15th book, and if Trump's scowling face on the cover is any indication, it's not a feel-good beach read. And if you're wondering, Gawker reports the phrase "making America great again" appears a total of 21 times in the book.