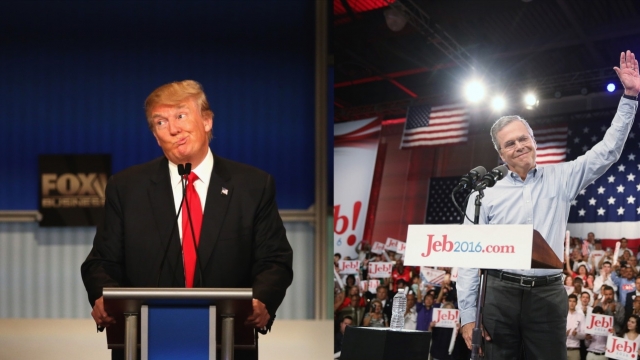 Donald Trump thinks there's a plot to take his delegates away at the Republican National Convention, and he's pretty sure he knows who is in charge of it — former Republican presidential candidate Jeb Bush.

Trump — the presumptive Republican nominee — talked of a "revolt" against him and told supporters in Las Vegas: "By the way, Jeb is working on the movement, just so you understand. ... Jeb is one of the people that's working  — and the other one should be obvious." But Trump never said who that other person might be.

But earlier in his speech, he said the idea of a coup was all made up by the media, "This is a story — who are they going to pick? I beat everybody. I beat the hell out of them."

Trump was referring to a story The Washington Post published last week that said there are dozens of Republican delegates trying to stop Trump from receiving the party's nomination this summer.

But preventing Trump from getting the nomination is still pretty unlikely. Those opposed to him would have to change the rules of the convention — an effort that requires the support of the majority of overall delegates. Otherwise, Trump already has a majority of delegates bound to him.

And for his part, Bush has pledged that he won't vote for Trump in the general election in November.

This video includes images from Getty Images and clips from Donald J. Trump for President Inc. and Jeb 2016.