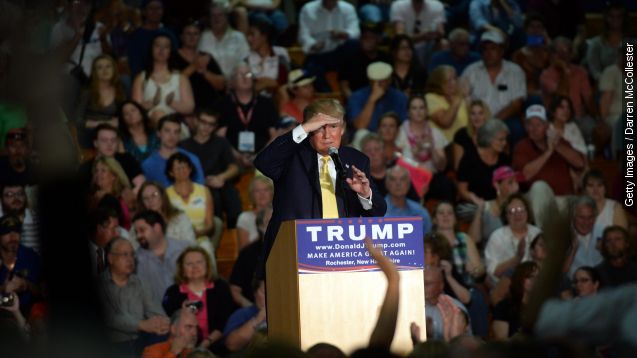 SMS
Trump Taking Heat For Non-Response On Muslims, Obama
By Jake Godin
By Jake Godin
September 18, 2015
Donald Trump is taking heat for the way he responded to a supporter's comments about the "problem" with Muslims and President Obama.
SHOW TRANSCRIPT

"We have a problem in this country. It's called Muslims. We know our current president is one, you know he's not even an American. Birth certificates, man," an unidentified man in the audience said.

Basically the question was, when can we "get rid of" Muslims in America, though clearly there are some fact errors in that question to Donald Trump at a town hall event in New Hampshire. This was his response.

Not exactly the answer many were expecting, and the presidential hopeful has been taking heat for it.

Chris Christie came out and said he would have corrected a comment like that at one of his town hall meetings.

"I wouldn't have permitted that if someone had brought that up in a town hall meeting of mine," Christie said.

And both Hillary Clinton and the Democratic National Committee have called him out.

Trump's side defended his response, saying, "Christians need support in this country," and that he was responding only to the man's question about an apparent rise in terrorist "training camps."

The moment stands in stark contrast to when John McCain was in a similar predicament speaking to voters in 2008.

"I have read about him, and he's not, he's uh, he's an Arab," an unidentified woman said to McCain.

"No ma'am. He's a decent family man, citizen, that I just happen to have disagreements with on fundamental issues, and that's what this campaign is all about," McCain responded.