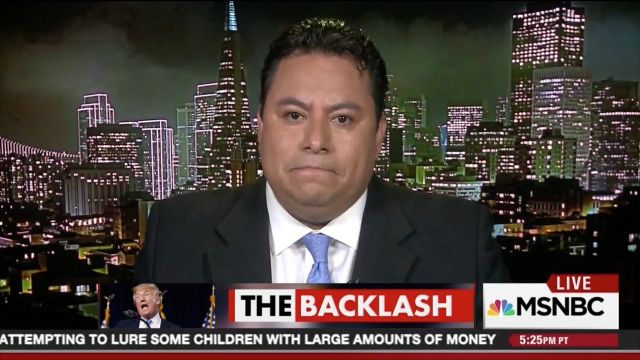 "My culture is a very dominant culture. And it's imposing, and it's causing problems. If you don't do something about it, you're going to have taco trucks on every corner," said Marco Gutierrez, co-founder of Latinos for Trump.

Gutierrez made the remark in response to a question from MSNBC's Joy Reid about what problems Hispanic immigration poses the U.S.

We can't speak to Gutierrez's issue with taco trucks, but it turns out a lot of other people would be OK with having them everywhere. The comment sparked a slew of Twitter jokes, food truck guides and musings about the economic impact this hypothetical fleet of taco trucks would have on America.

Somewhat lost in the shuffle was Gutierrez's argument that immigration could pose a threat to U.S. cultural homogeneity. The U.S. Hispanic population has more than quintupled over the past 40 years, and some immigration hardliners fear the influx of immigrants with new customs could erode the value of U.S. culture.

It's worth pointing out here that Hispanics still only make up 17 percent of the total U.S. population. And it's not like Hispanic influence has been totally absent from American history and culture until now.

But Gutierrez's comment is a good reminder some of Trump's supporters aren't motivated by debating the fine details of immigration policy. Their concern is the impact of immigration they can see in their lives — like the rise of taco trucks.