Trump Stands By Comments, Adding Muslim Judge Could Be Biased 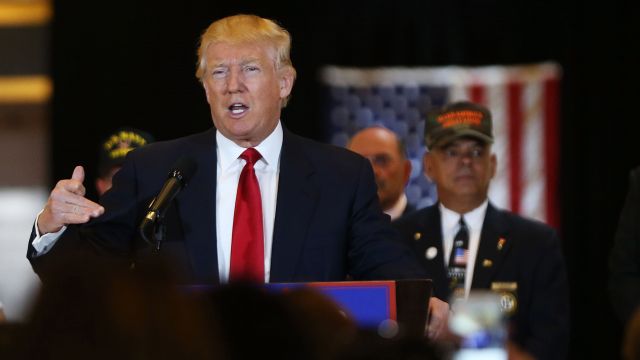 SMS
Trump Stands By Comments, Adding Muslim Judge Could Be Biased
By Lauren Stephenson
By Lauren Stephenson
June 5, 2016
Trump made the statement while standing by his claims that a judge who ruled against him has treated him unfairly because the judge is "Mexican."
SHOW TRANSCRIPT

Donald Trump said he thinks a Muslim judge could treat him unfairly due to his proposed ban on Muslims entering the U.S.

"If it were a Muslim judge, would you also feel like they wouldn't be able to treat you fairly because of that policy of yours?" moderator John Dickerson asked the presumptive Republican presidential nominee.

Trump was being asked about his recent comments about U.S. District Judge Gonzalo Curiel. Curiel is presiding over two of his Trump University lawsuits. Trump called the judge "hostile" and said he believed he is "Mexican." Curiel was born in Indiana and is of Mexican descent.

"I have a judge who is a hater of Donald Trump," he said during a rally last month.

Curiel ordered the release of hundreds of pages of internal documents from the now-closed Trump University. The documents were released last week.

A day after saying he would vote for Trump, House Speaker Paul Ryan said he disagreed with Trump's comments.

"He is temperamentally unfit to be president," she said during a campaign stop in California on Friday.

Trump doubled down on his comments Friday, saying Curiel should recuse himself.

"This judge is of Mexican heritage. I'm building a wall," he told CNN's Jake Tapper.

Former Attorney General Alberto Gonzales has said Trump is entitled to question whether the judge is fair but said Curiel's "Mexican heritage alone would not be enough to raise a question of bias."