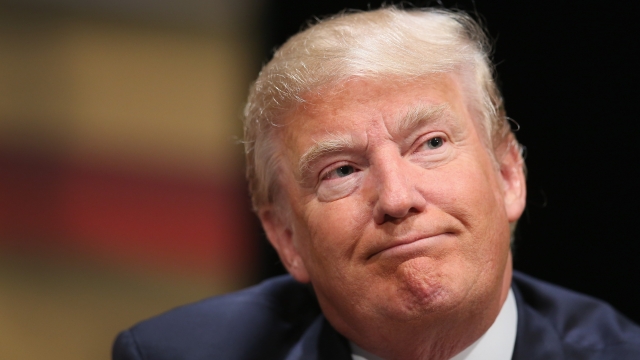 Donald Trump was back at it again on Friday, calling Massachusetts Sen. Elizabeth Warren "Pocahontas."

"Pocahontas — I'm doing such a disservice to Pocahontas. It's so unfair to Poc-" Trump told a crowd in Richmond, Virginia, on Friday night. "Elizabeth Warren. She's one of the worst senators in the entire United States Senate."

Trump has repeatedly referred to Warren as the famous Native American during rallies and press conferences and on Twitter because of a controversy Warren was involved in while campaigning for the U.S. Senate in 2012.

Warren said she told her former employers, the University of Pennsylvania and Harvard Law School, she has Native American ancestry, and she listed herself as a minority in a law professor directory. However, she was unable to provide documented evidence of it, saying she learned of her heritage through family stories. The Boston Herald reported Harvard Law School "touted" her as a minority, but Warren has claimed she never sought or received benefits from her claims.

"Trump is picking on someone who is ethically bound not to defend himself — exactly what you would expect from a thin-skinned racist bully," Warren said of Trump's criticism of a federal judge.

Trump has repeatedly said the judge presiding over two Trump University lawsuits is treating him unfairly because the judge is of Mexican heritage.

"This judge is of Mexican heritage. I'm building a wall," Trump told CNN's Jake Tapper. "I think he should recuse himself."

Before making his latest Pocahontas comments, Trump seemed to continue to heed calls to act more presidential, reading from a teleprompter during his speech at a Faith & Freedom Coalition conference Friday afternoon.

But Sen. Warren may have the last laugh. If you type in Pocahontas.com, you'll end up on her campaign website.

This video includes clips from CNN and images from United States Court of Appeals and Getty Images.