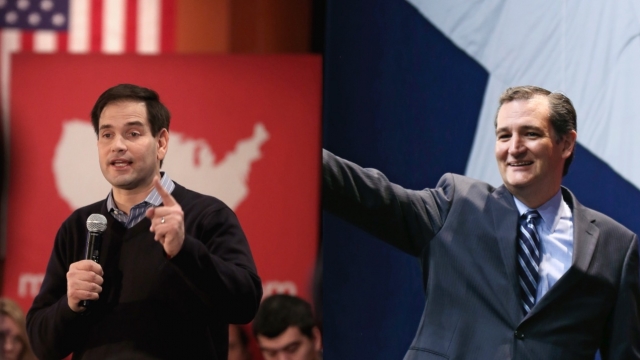 SMS
Trump Says He's 'Not Sure' If His Opponents Can Legally Be President
By Ryan Biek
By Ryan Biek
February 21, 2016
Republican presidential candidate Donald Trump retweeted a message from a follower saying Cruz and Rubio's ineligibilities were "slam dunk" cases.
SHOW TRANSCRIPT

Republican presidential candidate, and front-runner, Donald Trump is "not sure" if his main opponents are even eligible to run for president.

On Saturday, Trump retweeted a message in which a follower said both Marco Rubio and Ted Cruz were ineligible.

"It was a retweet –– not so much with Marco. I'm not really that familiar with Marco's circumstance," Trump said on ABC.

"But then why retweet it?" said George Stephanopoulos.

"Because I'm not sure. I mean, let people make their own determination," Trump said.

Rubio was born in Miami to immigrant parents and Cruz in Canada to an American mother.

Candidates don't actually have to prove eligibility unless they're challenged through a lawsuit. Both Republican candidates have faced several of these cases, but all, so far, have been dismissed.

The legal case revolves around the requirement the president be a "natural born citizen," a phrase which isn't defined in the Constitution.

Both candidates have argued against a strict reading of the phrase, with Rubio saying it "would jeopardize centuries of precedent and deem at least six former presidents ineligible for office."

"The law under the Constitution, and federal law, has been clear from the very first days of the Republic. The child of a U.S. citizen born abroad is a natural born citizen," Cruz said at a town hall meeting.

Trump's eligibility questions go beyond the Republican race. In January, he told CNN someday he'll write a book on his theory regarding President Obama's eligibility.

This video includes clips from CNN, the White House and ABC and images from Getty Images.