Trump Says Recount Bid Will Change Nothing — He Might Be Right 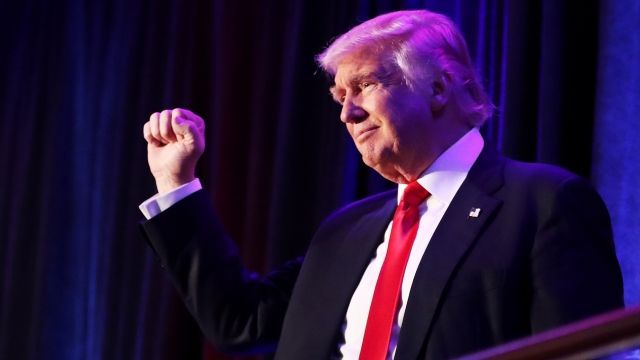 SMS
Trump Says Recount Bid Will Change Nothing — He Might Be Right
By Lindsey Pulse
By Lindsey Pulse
November 27, 2016
Even the Clinton campaign acknowledged the recount efforts probably won't do much to change the results.
SHOW TRANSCRIPT

Stein started crowdfunding for recounts in Wisconsin, Pennsylvania and Michigan last week. Shortly after, Hillary Clinton's general counsel announced the camp would be joining those efforts.

After that announcement, President-elect Trump sent a string of tweets calling the Green Party's move a scam and telling Democrats that "nothing will change."

Here's the thing, it's highly unlikely that a recount would have any effect on election results.

Let's say a recount is initiated and Clinton takes Wisconsin and Pennsylvania — that still wouldn't push her over the electoral minimum to win the presidency.

Losing both those states would pull Trump back under 270 electoral votes — which is what's needed to win the U.S. election.

That means it would be up to Michigan to decide a winner, and the state hasn't even finished counting its votes more than two weeks after the election.

Not to mention Clinton's team says the margin of votes needed there is larger than a recount is likely to affect.

There's been some confusion about why Stein initiated recount efforts in the first place. Stein lost with less than 2 percent of the vote in each of the three states. So no matter what happens, she won't end up the winner.

Other politicians have weighed in on the effort as well. When asked about how he felt, Sen. Bernie Sanders pointed out that recounts aren't unusual and "no one" expects there to be a "profound change" because of this one.