Trump's Weird Friendship With The Clintons Seems To Be Over 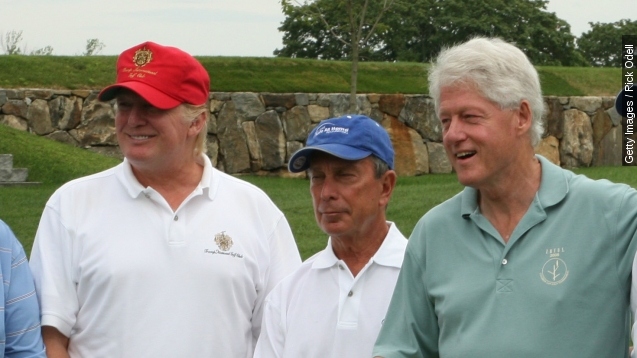 One part of Donald Trump's colorful interview with NBC that might've been overshadowed by the whole Mexico thing was his opinion of Hillary Clinton. (Video via NBC)

"She was the worst secretary of state in the history of our nation. Why would she be a good president? I think she'd be a terrible president," Trump said.

Which shouldn't be surprising, considering Trump's own presidential bid and his typical hyperbole, until you consider what Bill Clinton said about Trump just a few weeks ago. (Video via Donald Trump, Comedy Central)

"He has been, believe it or not, uncommonly nice to Hillary and me. He thought Hillary was a good senator from New York after 9/11," Clinton told The Daily Show.

And a couple years ago.

"Donald Trump has been uncommonly nice to Hillary and me, and I like him, and I love playing golf with him," Clinton told CNN.

"Actually, he's one of the many Republicans who's supported our foundation, before they got the memo," Clinton said.

Like with so many other political figures, it seems Trump's friendship with and access to the Clintons stems from those contributions.

Trump answered: "I would really say Clinton, probably. I would have to say Clinton."

And they were close enough that Hillary Clinton was at the Donald's third wedding in 2005, and Bill showed up for the reception.

To use a trademark Trump phrase, it's possible his recent Clinton criticism is "not personal, it's just business." (Video via ABC)

But given how quickly Trump has seen many of his business ties cut over the past few weeks, it wouldn't be too shocking if personal ties are the latest casualty of an increasingly brutal campaign.

This video includes images from Getty Images and music from Deal the Villain / CC BY NC ND 3.0.