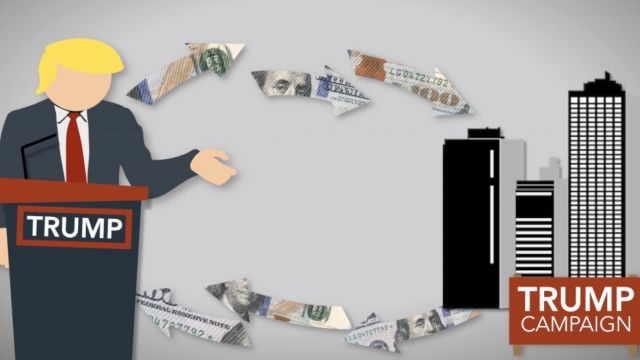 By Eugene Daniels
October 27, 2016
The relationship between his checkbook and his campaign isn't as one-sided as he leads people to believe.
SHOW TRANSCRIPT

Donald Trump talks a lot about how much money he's giving his campaign. That part's true, but it's a little more mutually beneficial than he makes it seem.

In reality, it looks more like this: Money goes from Trump to the campaign, but a little bit also goes back to Trump. Let's take a look at August and September.

First: the travel. You probably guessed, but The Donald doesn't do commercial airlines. Since clinching the nomination, the campaign has paid more than $1 million to TAG Air, a company owned by Trump.

And even the Trump campaign can't seem to get a free night at a Trump hotel. In facility rental or hotel stays, the campaign has paid nearly $400,000 to Trump's hotels. That includes campaign office rental at Trump Tower for almost $170,000.

And all that is just for two months. The Trump campaign has spent millions paying Trump businesses for different services.

Trump isn't making a profit from his presidential campaign — yet. But the relationship between his checkbook and his campaign isn't as one-sided as he leads people to believe.