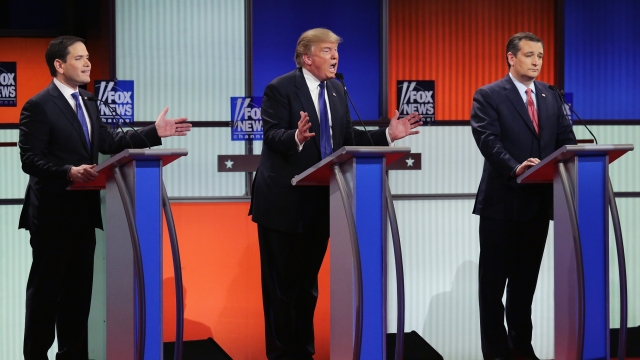 The mudslinging continues in the race for the GOP presidential nomination, though this one isn't about the size of anyone's body parts ... hands or otherwise.

This time, it appears Donald Trump's rivals are complaining he broke the rules at the most recent presidential debate on Fox News.

You may have noticed as Fox tossed to commercial breaks Thursday night, some of the candidates left their podiums to head off stage. There may be a reason for that.

Rival campaign sources told CNN that Trump's campaign manager Corey Lewandowski came on the stage to consult with the candidate and then refused to leave when Fox News staff confronted him.

The rival campaigns aren't happy because they say Fox News has made it clear candidates aren't allowed to talk to their campaign staff during commercial breaks. After Lewandowski's visit, Fox reportedly gave the thumbs up for other campaigns to talk to candidates to even things out.

Though to be fair, if we're going to talk about breaking debate rules, no one's squeaky clean here.