Trump's Ramos Feud May Cost Him The Latino Vote 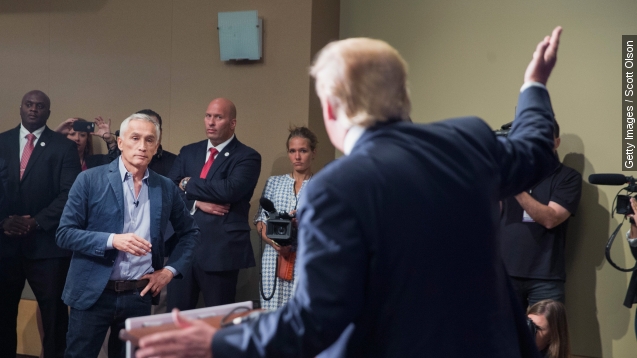 Donald Trump’s latest spot in the limelight could be dangerous for his campaign. (Video via C-SPAN)

In case you missed it, Trump recently made headlines after kicking Univision anchor Jorge Ramos out of a news conference in Iowa.

“Excuse me sit down you weren’t called, sit down."

But this isn’t the first media figure Trump has quarreled with since announcing his bid for the presidency. Remember Megyn Kelly?

“Honestly Megyn if you don’t like it, I’m sorry. I’ve been very nice to you although I could probably maybe not be based on the way you have treated me.” (Video via Fox News)

Trump has managed to hold on to female voters after the televised tiff with Kelly about his remarks towards women. But after his debacle with Ramos, it might be difficult for him to get the Latino vote. Here’s why.

For one, Jorge Ramos is a trusted name in news. He has anchored “Noticiero Univision” for about three decades with more than 2 million nightly viewers. (Video via Univision)

In 2010, Ramos was named a prominent leader in the Latino community by a study from the Pew Research Center. He was polled alongside Supreme Court Justice Sonia Sotomayor. (Video via C-SPAN)

The 57-year-old has graced the cover of TIME magazine’s 100 most influential people and is known for his aggressive interviewing style. (Video via TIME)

“Why did you deport 2 million people?”

It’s a style that makes it no surprise he approached Trump’s news conference the way he did. And The Donald’s response did not help the situation.

“Go back to Univision.”

Which didn’t sit well with Latinos on Twitter. Some said it was as if Trump was telling Ramos to “go back to Mexico.”

So will a public feud with one person prevent Trump from getting the Latino vote? Probably not.

But if you add that on top of his controversial remarks about illegal immigrants ...

“When Mexico sends it’s people they’re not sending their bests.”

“They are illegal immigrants. They came over illegally.” (Video via CNN)

Then yeah, it’s no surprise Trump is polling negatively among Latino voters by a large margin.

One thing’s for sure, Ramos isn’t letting Trump forget about him.

“He tried to silence me. In this country you can not do that.” (Video via Fox News)

This video includes images from Getty Images and music from "celery man" by Birocratic.