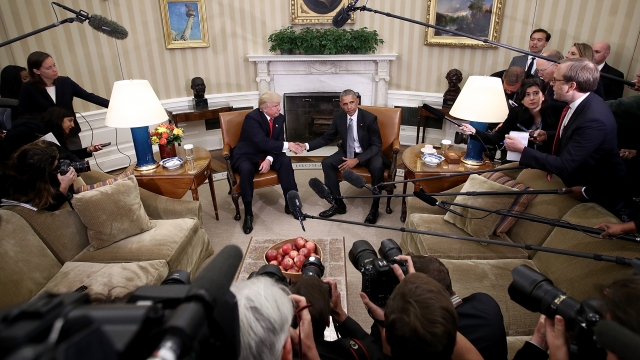 SMS
Why The Press Is So Worried About Access To The Trump Administration
By Ryan Biek
By Ryan Biek
November 16, 2016
The president-elect has been unusual in the lack of access and notice he's given to his press pool.
SHOW TRANSCRIPT

After telling his press pool he was calling it a day and staying home, Trump was spotted having dinner out with his family in New York City.

That might not sound like a big deal, but it's part of a growing list of incidents that have some journalists worried. Many fear they won't be able to provide complete coverage because of Trump's lack of transparency.

And Trump himself has given them reason to worry. During his campaign, Trump blacklisted certain critical journalists and called the press as a whole "dishonest."

But part of his new role is to tell the nation where he is at every moment. Several outlets have noted that the president's location should be on record in case a crisis occurs.

Trump has waited the longest of any recent president-elect to hold a press conference. As of Wednesday morning, he still hadn't held one.

And when Trump visited the White House to meet with President Obama, he left behind the media team assigned to him.

Trump's spokesperson has said his administration "fully [expects] to operate a traditional pool" by the time he takes office in January.