Donald Trump Is Mending Ties With Tech Giants ... Except For Twitter 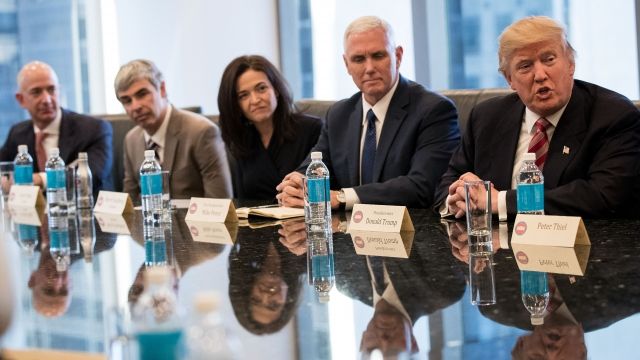 SMS
Donald Trump Is Mending Ties With Tech Giants ... Except For Twitter
By Briana Koeneman
By Briana Koeneman
December 15, 2016
The president-elect met with top executives from Apple, Amazon, Facebook and other tech giants. But Twitter was notably absent from the session.
SHOW TRANSCRIPT

Donald Trump seems to be working on mending his relationships with the tech industry's biggest companies.

The president-elect extended that olive branch to top executives from Apple, Amazon, Facebook and other tech giants during a meeting at Trump Tower in New York this week.

And it was a much different tone than the one he used toward some of those same people just months ago.

"What I think you ought to do is boycott Apple until such time as they give the security number," Trump said.

"This is owned as a toy by Jeff Bezos, who controls Amazon. Amazon is getting away with murder, tax-wise," Trump said.

One report from Politico suggested the company was left off the list because it rejected the Trump campaign's #CrookedHillary emoji earlier this year.

But a spokesperson from Trump's transition team told reporters Twitter wasn't invited to the session because "they aren't big enough."

Wednesday's session lasted longer than expected, and its attendees later said it was a "very productive" meeting.