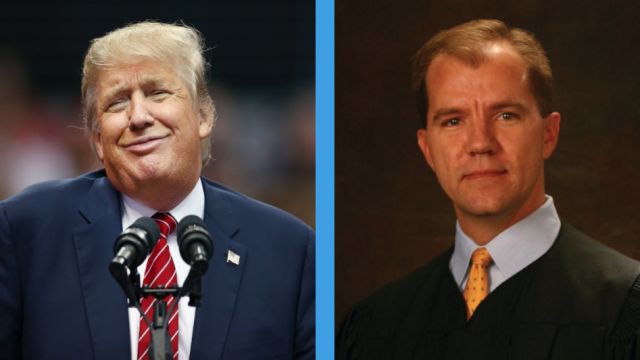 SMS
Trump's List Of SCOTUS Nominees Includes One Loud Twitter Critic
By Katie Link
By Katie Link
May 18, 2016
A scroll through Justice Don Willett's Twitter feed shows he might not be too pumped to be on Trump's shortlist.
SHOW TRANSCRIPT

On Wednesday, Donald Trump made good on a promise he made in March.

"I’m going to give a list of either five or 10 judges that I will pick — 100 percent pick — that I will put in for nomination," Trump said at a rally.

Well, he actually gave us a list of 11 judges — all people he says he would consider to fill the seat of the late Supreme Court Justice Antonin Scalia.

According to a statement from Trump's campaign, the list of candidates "was compiled, first and foremost, based on constitutional principles, with input from highly respected conservatives and Republican Party leadership."

These names are meant to prove a point — that Trump is indeed a conservative and can unite the GOP.

But that last name on the list, Don Willett, may not appreciate this distinction. His Twitter feed seems to indicate he’s not a huge fan of Trump.

Willett, a justice on the Supreme Court of Texas, first balked at the thought of a Trump-nominated SCOTUS judge on June 16, 2015 — the day Trump announced his candidacy.

Since then, he’s jabbed at the business mogul’s now-defunct university, his public works plan, his failed airline and more jabs at the university — apparently, those March Madness jokes were too good to pass up.

As for Willett's response to his name on Trump's shortlist? Well, he tweeted "Happy Wendesday!" with this dancing gif — hard to know how to interpret that.