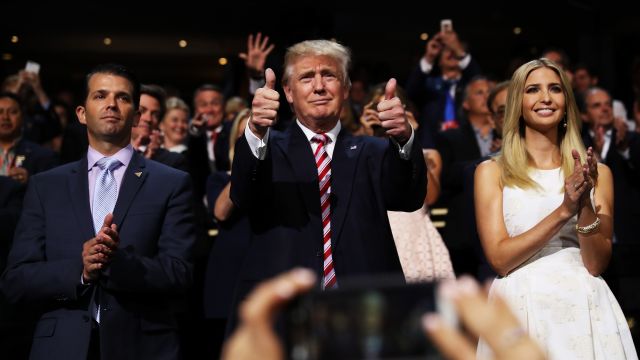 SMS
Trump Handing Business To His Kids Won't Resolve Conflicts Of Interest
By Jake Godin
By Jake Godin
November 29, 2016
Donald Trump says he's separating himself from his businesses by putting his kids in charge. But that won't solve the conflicts of interest.
SHOW TRANSCRIPT

And handing his business over to his kids wouldn't solve that. Here's why.

For one, this is not a blind trust — like, at all. In a blind trust, one person hands off their business to someone else and doesn't communicate with them. That's unlikely to happen.

And his daughter Ivanka Trump has been in a meeting with Japan's prime minister and a call with Argentina's president. She also met with Indian businessmen who spoke to Donald Trump about expanding deals with his ventures.

Plus, in a true blind trust, Trump would sell off his company assets, just as previous presidents have. But Trump plans to hold on to his, meaning he'll profit from any business gains during his presidency.

And previous presidents have set another standard Trump hasn't followed: releasing tax returns. That means we don't know the full scope of the potential conflicts of interest surrounding Trump — or his kids.