Even After The Election, Clinton Polls Better Than Trump 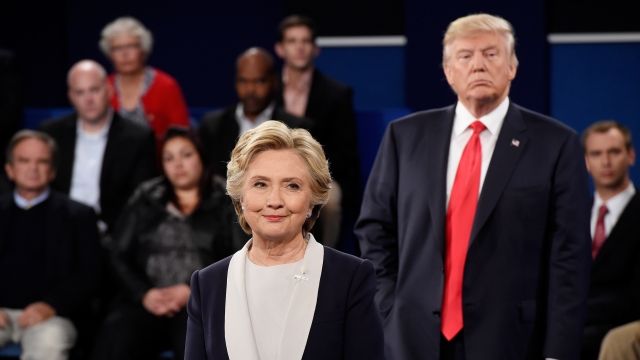 SMS
Even After The Election, Clinton Polls Better Than Trump
By Ryan Biek
By Ryan Biek
November 21, 2016
For the first time in Pew's history, the losing candidate polled better after the election than the winner.
SHOW TRANSCRIPT

For the first time in Pew's history, the losing candidate polled better after the election than the winner.

Using an A through F grading scale, the polling center found 30 percent of voters gave President-elect Donald Trump an A or B rating.

If you average all the scores, Trump received a C-, while Clinton got a solid C.

Clinton's higher rating may be less of a surprise considering that as of Monday, she was still leading in the popular vote. But it's not all bad news for Trump. Since the election, his popularity has improved quite a bit.

A Politico/Morning Consult poll found Trump's favorability jumped nine points roughly a week after the election, compared to right before it.

Similarly, a Gallup poll showed Trump's favorability improved eight points during that same period. But even with that gain, Trump's new approval rating is at least 16 points lower than any of the last three presidents-elect.

Gallup notes part of that lag is because Democrats have a much less favorable view of Trump than opposition parties have had for past presidents-elect.