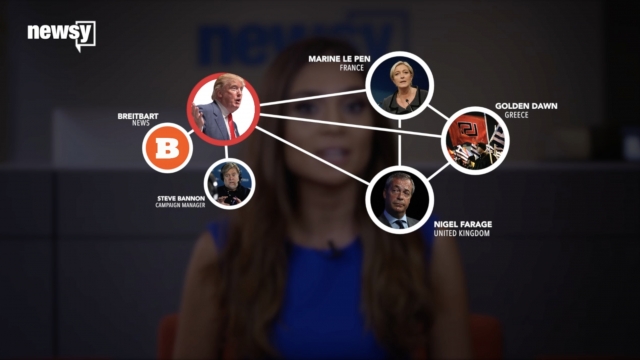 Here's something you might not know about the so-called "alt-right" movement fueling Donald Trump's campaign: There are versions of it all across the world. And they're growing their own brand of politics.

Defining the "alt-right" can be tricky. There's no formal platform of its beliefs, but there are common themes to both the U.S. movement and far-right groups gaining power throughout Europe.

First, nativism. Nativists oppose immigration. So Trump's promise to build a wall is appealing to the alt-right. So is his proposal for the mass deportation of 11 million undocumented immigrants. And his plan to ban Muslims from entering the country.

Europe's far-right groups have a similar message in France and in the Netherlands, and also in Greece, where the ultra-right nationalist group Golden Dawn is taking more power in government, while also being linked to neo-Nazi hate crimes.

The far-right U.K. Independence Party, or UKIP, pushed Britain out of the European Union in June's Brexit vote, a move bolstered by anti-immigration fears. Trump sees the similarities between himself and UKIP leader Nigel Farage, which could be why he asked Farage to join him on the campaign trail.

But these groups have also made subtle — and not so subtle — nods to anti-Semitism and white supremacy. The influx of refugees has fueled the rise of these far-right parties as millions try to escape ISIS and relentless Syrian and Russian airstrikes.

Besides being far-right, many of these groups have something else in common: They support Vladimir Putin's Russia. And in some cases, Russia supports them economically, politically or through Kremlin-sponsored media.

France's National Front has received millions of dollars in Russian loans to fund its campaign.  In Germany, Russian propaganda spread a fake story about a refugee raping a 13-year-old girl. Officials suspect the story was meant to stoke fear and anger toward refugees and harm Chancellor Angela Merkel ahead of an election.

But why would Russia's Vladimir Putin prop up far right extremist groups? Because isolationism throughout the West means weakening alliances like the European Union and NATO, and that's good for Russia.

It would let the country expand influence and territory, like in Ukraine. That's where Trump's campaign has already helped Russia, dropping the section of the Republican platform that supported Ukraine in its fight against Russian-sponsored rebels.

The fighting there began when Putin-backed president Viktor Yanukovych ordered a government crackdown that killed 100 protesters. His political adviser, Paul Manafort, served as Trump's campaign manager until controversy forced him out. Trump replaced this Russia-aligned campaign manager with the head of Breitbart news, the leading U.S. media outlet for the alt-right and a hub of far-right nationalism.