Donald Trump Rushed Off Stage After Protester Clashes With Crowd 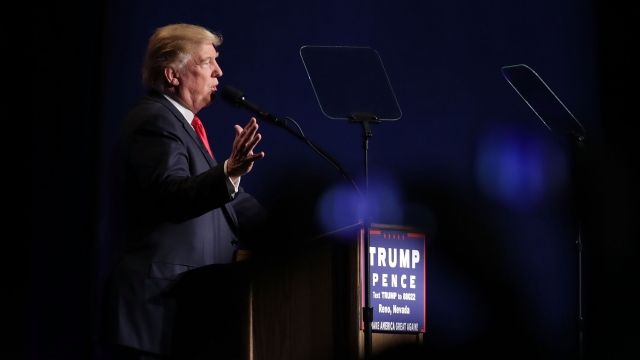 SMS
Donald Trump Rushed Off Stage After Protester Clashes With Crowd
By Lindsey Pulse
By Lindsey Pulse
November 6, 2016
Crowds swarmed the protester when he held up a "Republicans Against Trump" sign.
SHOW TRANSCRIPT

Donald Trump was rushed off stage by Secret Service members after a supposed gun threat at a rally in Reno, Nevada.

Video shows Trump looking into the crowd right before officers grabbed the candidate and pulled him behind the stage.

Multiple reports say the incident was triggered by a man named Austyn Crites, who was holding a "Republicans Against Trump" sign. But Crites says crowd members swarmed him and began beating him.

A Secret Service spokesperson told reporters at some point during the incident an unidentified individual shouted "gun" in front of the stage, which triggered the rush of authorities into the crowd.

No gun was found after a "thorough search." Secret Service members detained Crites and led him out of the rally.

Trump came back on stage after a few minutes to continue his speech and thanked the Secret Service members.

"Nobody said it was going to be easy for us, but we will never be stopped," Trump said.