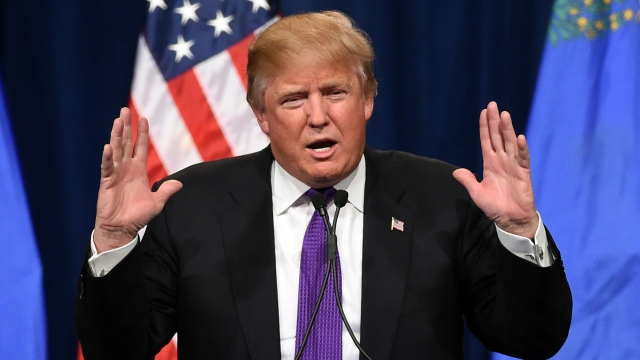 SMS
Trump Reveals A More Conservative-Leaning Health Care Plan
By Ryan Biek
By Ryan Biek
March 3, 2016
Some of his seven points show a change of strategy for the Republican front-runner.
SHOW TRANSCRIPT

Likely hoping to avoid a similar attack, Trump released details of his plan just before the upcoming debate Thursday night.

So far, his plan features seven points. Some have called it "sketchy" but more concrete than the plans of his Republican rivals.

In addition to wanting to completely repeal "Obamacare," he says the individual mandate –– the tax penalty imposed on those who don't buy insurance –– needs to be eliminated.

It's an interesting change of heart, seeing as Trump said he admired the individual mandate in mid-February.

Now he says his proposed incentive for individuals to buy insurance would allow people to "fully deduct health insurance premium payments from their tax returns."

In a way, it's similar to Rubio's proposed tax credits to buy insurance. However, Trump's plan may not be as beneficial to those with lower incomes, since they pay less in taxes.

Trump also advocates for the sale of insurance across state borders, which he argues will drive supply up and costs for citizens down. In the same vein, he pushes for allowing consumers to access drugs from overseas that have been proven safe.

As for Medicaid, Trump argues states should be allowed to allocate federal funding as they see fit. He says, "The state governments know their people best and can manage the administration of Medicaid far better without federal overhead."

This video includes clips from Donald J. Trump for President, The White House, ABC, CNN and Marco Rubio for President and images from Getty Images.