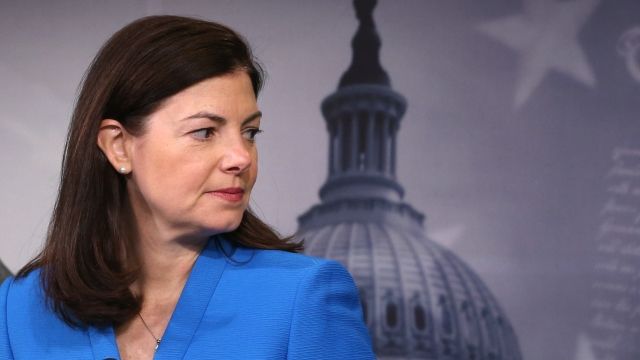 It's no secret that Donald Trump likes winning.

"We will have so much winning if I get elected that you may get bored with winning," Trump said at a rally in 2015.

But according to The Washington Post, Trump's team is vetting Kelly Ayotte for secretary of defense, someone who just lost her Senate seat.

If true, it's surprising Ayotte's name is even on the list, given her on again, off again relationship to the Trump candidacy.

Most of the other names that have been floated for Trump's cabinet, like Newt Gingrich and Rudy Giuliani, have been vocal Trump supporters for a long time.

One of Trump's most prominent defense and military surrogates, Gen. Mike Flynn, isn't eligible for the position because of a law that requires the secretary of defense to be out of active military service for seven years before taking the job.

But Ayotte alternated between tolerating Trump's campaign and distancing herself from it — sometimes within the same 24 hours.

"Would you point to him as a role model?" a debate moderator in the New Hampshire Senate debate asked Ayotte.

"I think that certainly there are many role models that we have, and I believe that he can serve as president. And, so, absolutely," Ayotte answered.

"But in a statement after, she said neither Donald Trump nor Hillary Clinton have set a good example," John Berman said on CNN.

Ayotte eventually backed half of Trump's ticket and wrote in Mike Pence's name for president, citing the leaked Access Hollywood tapes as the reason. She said, "I cannot and will not support a candidate for president who brags about degrading and assaulting women."

But from a practical standpoint it makes sense. Ayotte is a well known GOP figure who served on both the committee for Armed Services and the committee for Homeland Security and Governmental Affairs. And it could signal Trump is willing to compromise with establishment conservatives.

One Washington Post reporter wrote that Ayotte could help "smooth out the relationship between Trump and the generals whom he routinely insulted."