Trump's Clinton Friendship Comes Back To Bite Him On Black Outreach 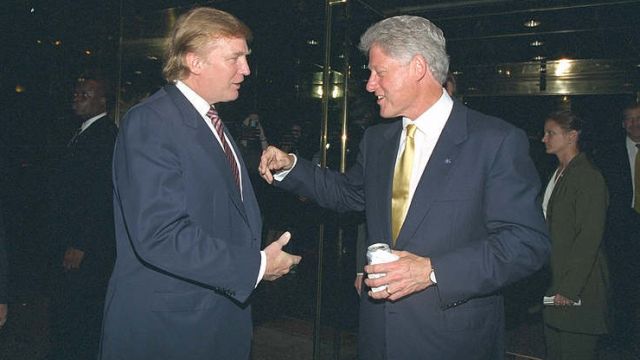 SMS
Trump's Clinton Friendship Comes Back To Bite Him On Black Outreach
By Matt Picht
By Matt Picht
September 23, 2016
Donald Trump has been attacking Hillary Clinton's record on race — but in 2011, he praised both Clintons' African-American outreach.
SHOW TRANSCRIPT

He's made comments like, "Hillary Clinton is a bigot," "It is the Democratic party that is the party of slavery," "... the bigotry of Hillary Clinton, which panders to and talks down to communities of color," and "You've been trying and working in the inner cities with the Democrats for so many years ... and they're a disaster."

So it's a tad inconvenient for Trump that he's praised the Clintons' work with African-American communities in the past.

"Whether you like them or don't like them, they have done so much for the African Americans," Trump said during a radio interview.

Buzzfeed dug up that audio from a radio interview Trump gave to Sean Hannity in 2011 — in it, Trump defended Bill Clinton from accusations of racism.

It's yet another reminder of the once-chummy relationship Trump used to share with the Clinton family — ties both Trump and Hillary Clinton have disavowed on the campaign trail.

But it's not like their old friendship is news at this point: Photos of the Clintons attending Trump's wedding in 2005 have been widely circulated this election cycle. And The Washington Post reported that Bill Clinton and Trump talked politics over the phone weeks before Trump launched his campaign.

As for whether this revelation will hurt Trump's credibility on the issue, his supporters have forgiven plenty of reversals from Trump in the past.