Trump On Rally Protesters: 'I Hope You Arrest 'Em' 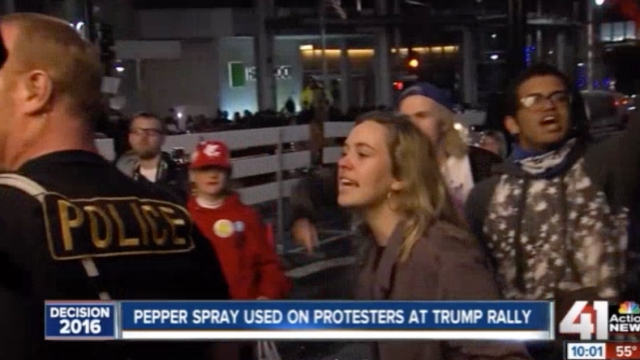 SMS
Trump On Rally Protesters: 'I Hope You Arrest 'Em'
By Melissa Prax
By Melissa Prax
March 13, 2016
On the heels of protests at Donald Trump rallies in Chicago and St. Louis, at least two people were arrested at a rally in Kansas City, Missouri.
SHOW TRANSCRIPT

"Go home to mommy, get them out of here, get them out," Trump said. Protesters congregated both inside and outside of the Midland Theatre.

And after dozens were escorted out of the venue, the police sprayed the crowd with pepper spray.

This comes on the heels of violent protests at Trump rallies in both St. Louis and Chicago Friday night. The Trump campaign was forced to cancel the Chicago rally.

During Sunday's rally, Trump said he was encouraged by Kansas City officials not to come because protests were expected.

"I told the police I knew there was going to be problems here," Trump said.

After the rally, Kansas City Police tweeted, "We had to use pepper spray 2 times outside Trump rally and arrested 2 people who refused to follow law." Newsy's partners at KSHB later reported four were arrested.