Trump Alludes To A Theory That Huma Abedin Has Islamist Ties 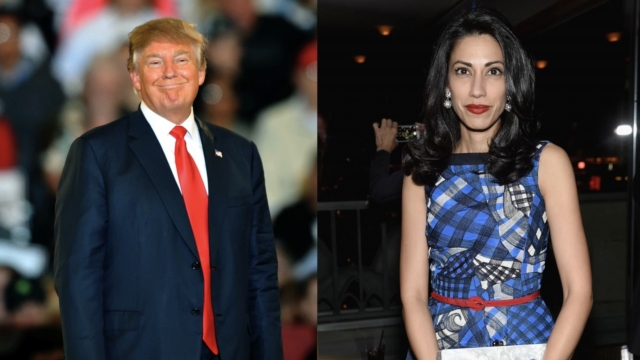 While saying he thought Abedin's relationship with her husband, former Congressman Anthony Weiner, reflected "terribly" on Clinton's campaign, Trump focused most of his attention on Abedin.

While he never explicitly said it, Trump was likely referring to Abedin's connection to the Journal of Minority Muslim Affairs. Some politicians and media outlets like the New York Post have said the journal promotes radical views, but others like the "Fact Checker" column from The Washington Post dispute that claim.

A spokesman for Clinton's campaign said Huma Abedin had no formal role at the publication, which was started by her parents, and that her name was simply on the masthead.

The Nation reached out to Trump's camp to get some clarification on what the outlet called an "accusation" against Abedin.

Trump's campaign spokeswoman responded with, "There is nothing more to add but I would definitely not characterize that as an 'accusation,' it's a statement or a suggestion."

During the radio interview, Trump also brought up his security concerns about Abedin's relationship.

"Huma Abedin has access to classified information. ... But to think that it's very likely much of this information Anthony Weiner would know about," Trump said.

He brought up the same thing during a Massachusetts rally last year and again in a statement he released praising Abedin for "making a very wise decision" in splitting from her husband.