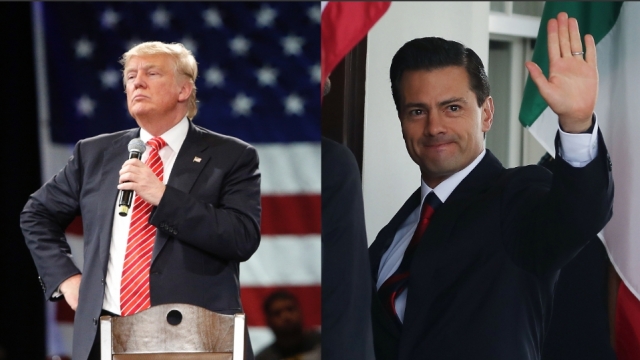 "When I say we're gonna build a wall, they all say: 'Woah, What are you talking about? You can't build a wall.' Of course you can build. It's simple," Donald Trump said.

"We're gonna build a wall. And who's gonna pay for that wall?" Trump asked.

"How are you going to make them pay for the wall?" Wolf Blitzer asked during a debate.

"I will, and the wall just got 10 feet taller. Believe me," Trump answered.

You could say the wall has been the centerpiece of Trump's presidential campaign.

So when the GOP candidate flew to Mexico to visit with their President Enrique Peña Nieto, it's fair to say many were curious whether that wall would come up.

"We did discuss the wall. We didn't discuss payment of the wall. That'll be for a later date," Trump said during a press conference following the meeting.

Peña Nieto took to Twitter to disagree, writing: "At the beginning of the conversation with Donald Trump I made it clear Mexico will not pay for the wall."