Trump Jr.'s Plagiarism Accusation Had A Cryptic, Then Clear, Answer 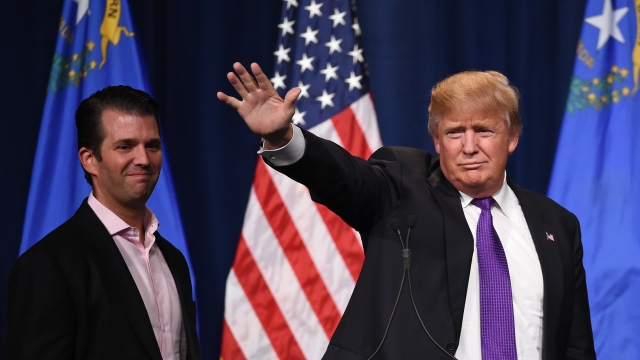 SMS
Trump Jr.'s Plagiarism Accusation Had A Cryptic, Then Clear, Answer
By Ryan Biek
By Ryan Biek
July 20, 2016
Donald Trump Jr.'s controversy came the night after his stepmother was accused of lifting part of her speech.
SHOW TRANSCRIPT

Did Donald Trump Jr. plagiarize part of his Republican National Convention speech the day after his stepmother was accused of doing the same?

"Our schools used to be an elevator to the middle class. Now they're stalled on the ground floor. They're like Soviet-era department stores that are run for the benefit of the clerks and not the customers," Trump Jr. said in his speech.

It didn't take long for Twitter users to realize that sounded a lot like an article by F.H. Buckley, which was published just a few months ago.

Social media was on high alert already, considering how extremely close the wording of Melania Trump's speech Monday was to first lady Michelle Obama's in 2008.

But accusations against Trump Jr. fell by the wayside with one cryptic tweet by Buckley.

The law professor then told multiple outlets he was actually the principle speechwriter for Trump Jr. and that it wasn't an issue.

The line Trump Jr. used in his speech summed up the biggest issue for Buckley in this election: not economic inequality, per se, but a lack of upward mobility.

In his essay, Buckley wrote, "That anger at the class society we have become explains the rise of Donald Trump."

Interestingly, the next paragraph after the one Trump Jr. borrowed from argues America's immigration system is "broken." Buckley said the country is actually missing out on better upward mobility by the kind of immigrants it's keeping out.

Although Donald Trump Sr.'s immigration plan is more nuanced than just building a wall, the issue is one of his most controversial.