A Stranded Motorist Got Some Unexpected Help From Trump Jr. 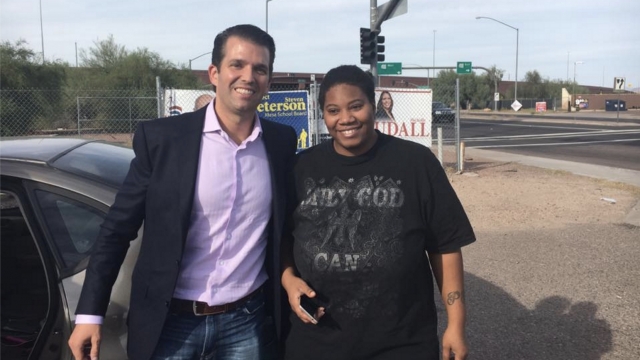 SMS
A Stranded Motorist Got Some Unexpected Help From Trump Jr.
By Katherine Biek
By Katherine Biek
October 28, 2016
Donald Trump Jr. and his team were on their way to an event in Arizona when they saw the woman's car stall.
SHOW TRANSCRIPT

A stranded motorist in Arizona got some unexpected help with her vehicle Thursday from Donald Trump Jr.

According to a local Republican party chairman, Trump Jr. and several others were on their way to a campaign event in Mesa when they saw a woman's car stall.

Chairman Tyler Bowyer told The Arizona Republic, "... before you can blink, [Trump Jr.'s] out there pushing the car."

With local temperatures at more than 100 degrees Thursday, Trump Jr. also reportedly made sure the woman had plenty of water while she waited for assistance with her car.

Bowyer said the woman was "stunned" by Trump Jr.'s help — so much so she didn't think people would believe her unless she got a picture with him.