Trump Isn't The Anti-Israel Candidate Louis Farrakhan Is Looking For 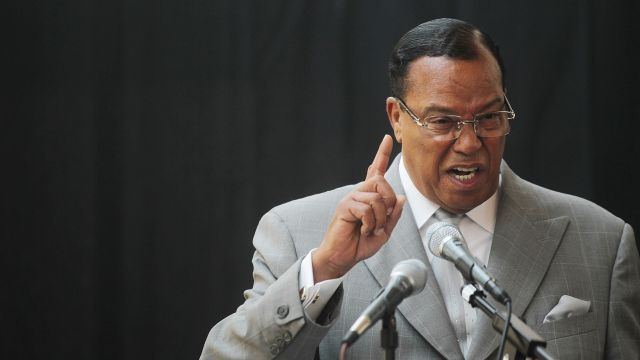 SMS
Trump Isn't The Anti-Israel Candidate Louis Farrakhan Is Looking For
By Matt Picht
By Matt Picht
March 1, 2016
The leader of the Nation of Islam isn't a Trump fan yet, but he does appreciate the businessman's independence from Jewish donors.
SHOW TRANSCRIPT

It's not exactly an endorsement, but Nation of Islam leader Louis Farrakhan has praised Donald Trump for his financial independence from Jewish donors during a recent sermon.

Farrakhan is an avowed anti-Semite; according to the Anti-Defamation League, he used the same speech to blame Jews for 9/11 and the Iraq War. But is Trump really the anti-Jewish candidate Farrakhan hopes he is? Not quite.

It's true Trump isn't beholden to any campaign donors, Jewish or otherwise. Self-financing has been one of the major selling points of Trump's campaign almost since day one.

He's also cast doubt on Israel's commitment to peace with Palestine and suggested he'd approach the Israeli-Palestinian relationship as a neutral party, comments which his GOP competitors have taken him to task for.

"A deal is not a deal when you're negotiating with terrorists," GOP candidate Marco Rubio retorted.

But the Presbyterian businessman has deep ties to the Jewish community; he's endorsed Israeli Prime Minister Benjamin Netanyahu for election, marched at the head of a Jewish parade in New York and has promised to support Israel "1,000 percent" if he's elected.

Oh yeah, and his daughter's Jewish. Ivanka Trump converted to Judaism before marrying her spouse Jared Kushner in 2009.

It's worth noting Trump's support for Israel isn't necessarily mutual; Netanyahu blasted Trump's stance on Muslim immigration to the U.S. in December. Trump canceled a trip to Israel shortly thereafter, for what he claimed was a scheduling conflict.

This video includes images from Getty Images and clips from MSNBC, CNN and Right Side Broadcasting,