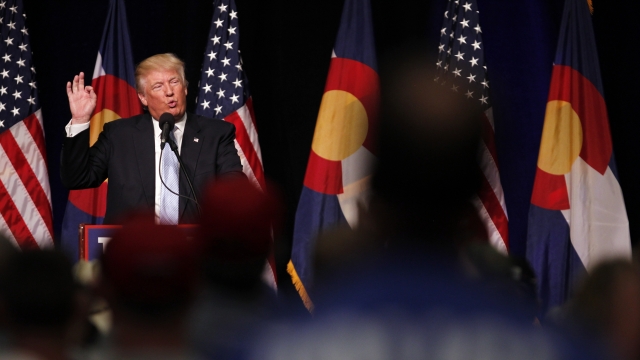 SMS
Trump Is Starting To Agree With Calls To 'Lock Up' Clinton Over Emails
By Melissa Prax
By Melissa Prax
July 29, 2016
At a Colorado rally, Donald Trump said he was tired of playing "Mr. Nice Guy."
SHOW TRANSCRIPT

"Trump is going to be no more Mr. Nice Guy."

That was Donald Trump's response to a Colorado rally audience chanting to lock up Hillary Clinton.

"You know what, I'm starting to agree with you. ... Every time I mention her, everyone screams, 'Lock her up, lock her up,'" Trump said.

In early July, the FBI director recommended against charges for Clinton's use of a private email server during her time as secretary of state.

Trump has been quick to highlight Clinton's email scandal in the past but has shied away from agreeing with the audience's call to put Clinton behind bars. But this time, he appeared to go off script.

"Isn't it better when we don't have these teleprompters?" Trump said.

This video includes clips from KDVR, Hillary for America and CNN and images from Getty Images.