Why LGBTQ Republicans Hate The Party's Platform But Like Donald Trump 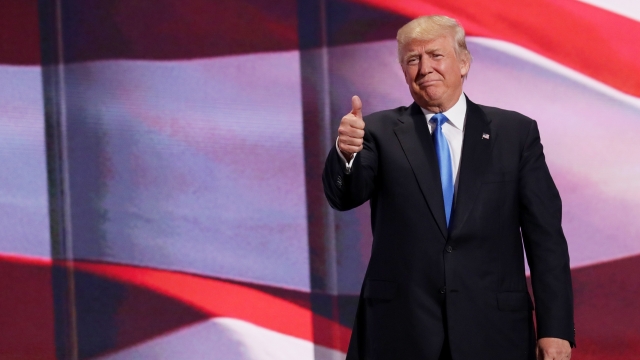 "Donald Trump would be the most pro-gay nominee the Republican Party has ever had," said Gregory T. Angelo, president of Log Cabin Republicans.

"When it comes to LGBT issues, the platform is not just bad, it's resoundingly bad. This is quantifiably the most anti-LGBT platform the Republican party has ever … had."

This is kind of a weird year for LGBTQ Republicans. On gay, lesbian and transgender issues, a lot of them are pretty hopeful about their nominee, but they hate their party platform.

Even though Trump has said he doesn't agree with the Supreme Court's decision on gay marriage.

He's also attended a same-sex wedding, said he would allow Caitlyn Jenner to use the bathroom she chooses at Trump Tower and has donated money to LGBTQ charities for HIV/AIDS.

"Ask the gays what they think and what they do, and then you tell me, who's your friend, Donald Trump or Hillary Clinton?" Trump said.

But while LGBTQ Republicans have a presidential candidate they think is more supportive, their party's platform is taking a sharp turn away from them.

It's got a provision meant to support conversion therapy for LGBTQ individuals, it's against same-sex marriage and it's against transgender individuals using the bathroom that matches their gender identity.

An LGBTQ Republican group even took out a full-page ad against the platform in USA Today.

The party adopted the platform Monday, but the LGBTQ Republicans we talked to say they're still hopeful Trump will come out as more supportive of the issues that matter to them.

This video includes clips from Matt Baume / CC BY 3.0 and ABC.