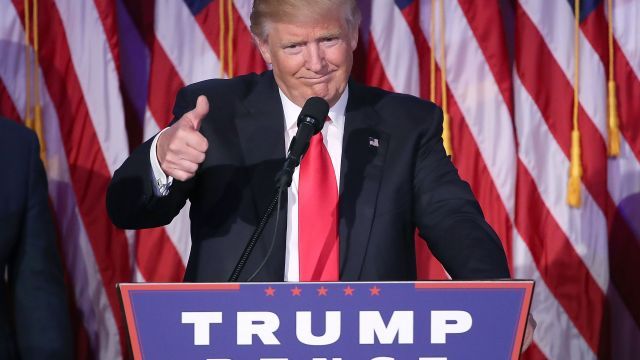 SMS
Trump Condemns Neo-Nazis In Meeting With New York Times
By Jake Jones
By Jake Jones
November 22, 2016
In a meeting with reporters from the Times, President-elect Donald Trump said he "disavows and condemns" neo-Nazis who organized in Washington, D.C.
SHOW TRANSCRIPT

President-elect Donald Trump says he disavows and condemns the apparent rise of the alt-right movement and white nationalism following his election victory.

Specifically, he was referring to a meeting organized by the National Policy Institute. Members were caught on tape yelling "Hail Trump" and giving Nazi salutes.

The president-elect has received harsh criticism for, among other things, appointing Steve Bannon as his chief strategist. Bannon is a former executive at Breitbart News and once claimed it was a "platform for the alt-right." Trump said it was "just a publication."

Trump defended Bannon in a meeting with The New York Times and said he wouldn't have hired him if Bannon were racist.

Trump also touched on a wide range of topics from his "open mind" on humanity's role in climate change to whether he could remain detached from his business while in office.