Trump Has Managed To Unite Almost Everyone — Against Him 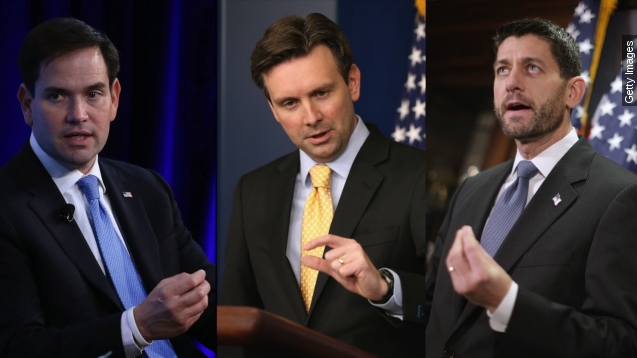 SMS
Trump Has Managed To Unite Almost Everyone — Against Him
By Eugene Daniels
By Eugene Daniels
December 8, 2015
Donald Trump has claimed to be a "great unifier," and it looks like he's sort of right. Droves of politicians are blasting him.
SHOW TRANSCRIPT

The White House says Donald Trump should be disqualified from running for president. (Video via the White House)

For this: "Donald J. Trump is calling for a total and complete shutdown for Muslims coming to the United States until our country's representatives can figure out what the hell is going on."

The administration also called on the GOP to denounce Trump,

which they have. In droves. (Video via the White House)

So did GOP leadership. (Video via CNN)

Public figures were thumping Trump all day. (Audio from "The Hugh Hewitt Show")

Some mayors want him banned from their cities.

And Jeff Bezos went even further — he suggested sending Trump to space. (Video via Blue Origin)

This video includes images from Getty Images and music by “Ergo” by Birocratic / CC BY ND 3.0