Trump Doesn't Want An Independent In The Race — Unless It's Him 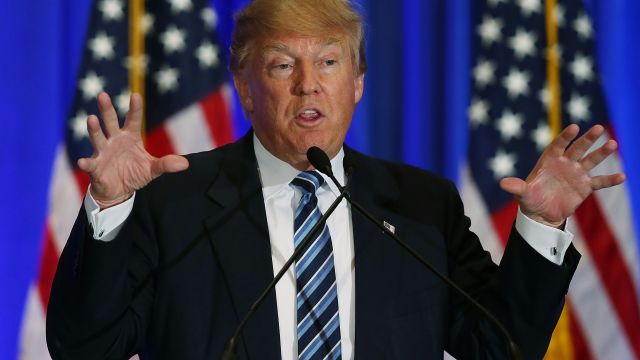 SMS
Trump Doesn't Want An Independent In The Race — Unless It's Him
By Jake Godin
By Jake Godin
May 30, 2016
It's strange that Trump is so sour on the idea of an independent candidate, considering he's threatened to run as one multiple times in the past.
SHOW TRANSCRIPT

Donald Trump seems a little perturbed at the possibility of an independent candidate entering the presidential race, even though he once threatened to run as an independent.

Trump's response included calling Kristol a "dummy" and warning that an independent candidate would hand the election to Clinton.

Aside from the fact the GOP contender is still referring to his own party as "they," it's strange that Trump is so sour on the idea of an independent candidate.

Just three months ago, Trump was renewing a threat to run as an independent himself because he thought the Republican Party was being unfair to him.

"I am watching television, and I am seeing ad after ad after ad put in by the establishment, knocking the hell out of me, and it's really unfair. But if I leave, if I go, regardless of independent, which I may do — I mean, may or may not," Donald Trump said on MSNBC in March.

Another conservative candidate could siphon votes away from Trump and severely undermine his chances in the general election.