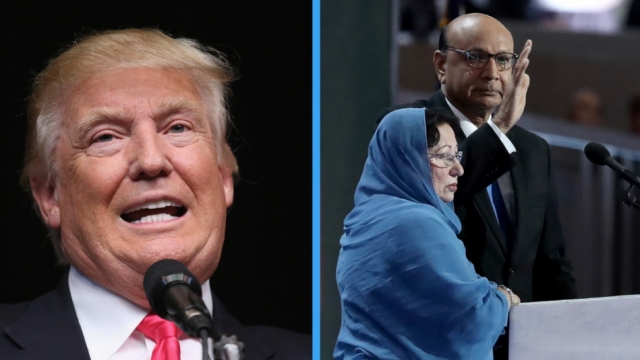 SMS
Trump Doesn't Agree With The Father Of A Slain US Soldier On Sacrifice
By Melissa Prax
By Melissa Prax
July 30, 2016
Donald Trump has responded to fallen Muslim U.S. soldier Humayun Khan's father, who spoke at the Democratic National Convention.
SHOW TRANSCRIPT

"I think I've made a lot of sacrifices," Trump said.

This is Donald Trump's comeback to Khizr Khan — the father of a fallen Muslim U.S. soldier.

Khan spoke brashly about Trump at the Democratic National Convention.

"You have sacrificed nothing," Khan said.

"If you look at his wife, she was standing there. She had nothing to say. She probably, maybe she wasn't allowed to have anything to say," Trump said.

But Khan's wife, Ghazala, said she was overcome with sadness.

"When I saw the picture ... I couldn't take it, and I controlled myself at that time, so it is very hard," Ghazala Khan said.