Trump, Cruz And Kasich Back Away From Their RNC Loyalty Pledges 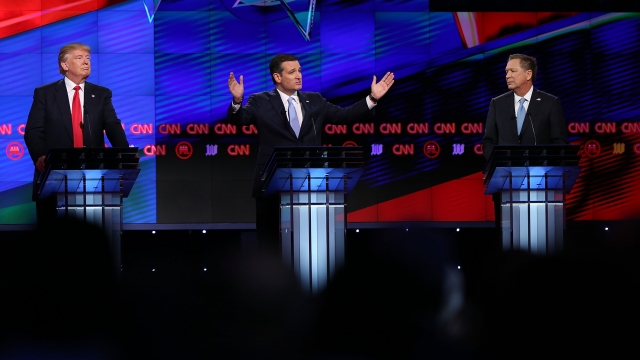 SMS
Trump, Cruz And Kasich Back Away From Their RNC Loyalty Pledges
By Melissa Prax
By Melissa Prax
March 30, 2016
Despite signing a pledge and recently promising their support, the GOP candidates now don't seem so sure they'll back the party's nominee.
SHOW TRANSCRIPT

The remaining GOP candidates finally all agree on one thing — not putting their support behind the party's nominee.

In September, the candidates signed a Republican National Convention loyalty pledge saying they'd support whomever the nominee would be.

But the candidates were singing a different tune at Tuesday's CNN town hall.

Donald Trump said, "I've been treated very unfairly. ... I think by basically the RNC, the Republican Party, the establishment."

Ohio Gov. John Kasich said of the pledge, "All of us shouldn't even have answered that question."

Texas Sen. Ted Cruz said, "I'm not in the habit of supporting someone who attacks my wife and attacks my family."

All three candidates have flip-flopped on their commitment to that loyalty pledge before, but they most recently said at a Fox News debate in March they'd support the nominee — even if it was Donald Trump.

"Yes, because I gave my word that I would," Cruz said.

"I will support whoever is the Republican nominee for president," Kasich said.

"I'm going to give them some credit, too, even though they don't deserve it, but the answer is yes I will," Trump said.

And there's a possibility of a contested convention in July. So if Trump doesn't get the needed delegates to lock up the nomination, Cruz, Kasich or even someone else from the Republican Party could still be the nominee.