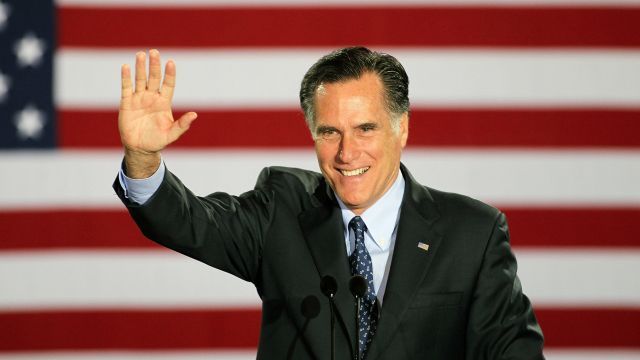 By Matt Picht
November 17, 2016
Mitt Romney is the latest of Donald Trump's GOP critics to be in line for a Cabinet position.
SHOW TRANSCRIPT

As President-elect Donald Trump searches to staff up his new administration, his transition team is casting a pretty wide net.

Case in point, CNN reports Trump is planning to meet with Mitt Romney over the weekend.

"Donald Trump is a phony, a fraud. His promises are as worthless as a degree from Trump University," Romney said during a speech.

Romney has been one of Trump's fiercest GOP critics since the Republican primaries, saying his candidacy was doomed to fail. Romney didn't endorse Trump before Election Day, though he did call to congratulate Trump after his victory.

An NBC reporter says the meeting might put Romney up for consideration as Trump's secretary of state. If true, Romney would be the latest GOP critic Trump's team has courted for a Cabinet position.

South Carolina Gov. Nikki Haley is another potential candidate for secretary of state. During the GOP primary, she repeatedly backed Trump's political rivals over him and cautioned Trump about his divisive rhetoric.

And Texas Sen. Ted Cruz was one of the last presidential candidates left standing against Trump. He infamously refused to endorse him until late in the election season.

Bloomberg reports Cruz might get the attorney general job, after two of Trump's other contenders — former New York City Mayor Rudy Giuliani and New Jersey Gov. Chris Christie — were taken out of the running.

Former Texas Gov. Rick Perry also went up against Trump during the GOP primaries, and he's now being tapped to head the Department of Energy. That's the agency Perry infamously forgot the name of during a 2011 debate.

"The third one. I can't, sorry. Oops," Perry said after forgetting the Department of Energy's name on stage.