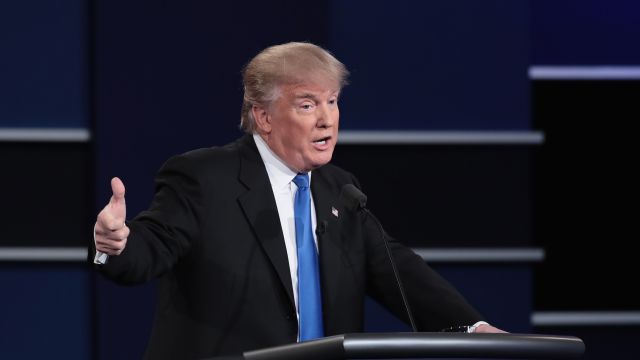 Eighteen million dollars. That's how much Donald Trump's campaign says his performance at the first presidential debate was worth.

"I am very underleveraged. I have a great company. I have tremendous income," Trump said during the debate.

The Trump campaign says it brought in $18 million in donations in the first 24 hours after the debate wrapped up. The campaign's finance chairman cites Trump's "huge debate win" as the reason for the fundraising surge.

It also helped that the campaign planned a fundraising blitz for the day after the debate, working through donor call lists prepared by its top fundraisers.

Politico reports the push was directed to Republican donors who've been reluctant to support Trump's campaign so far. Several big-name Republican donors, like casino magnate Sheldon Adelson, have opted to support down-ballot Republican races rather than donate to the Trump campaign.

Hillary Clinton is still beating Trump in the fundraising race: Looking at the numbers through the end of August, Clinton has raised more than double the amount of money Trump has.

But the Trump campaign has been stepping up its game recently, especially with small donors. Trump has raked in around $100 million from donors giving $200 or less — a GOP record.

And that's good news for the Republican Party as a whole. Thanks to a deal struck with the campaign, the Republican National Committee is getting a 20 percent cut of Trump's small donations and access to his small donor information banks.