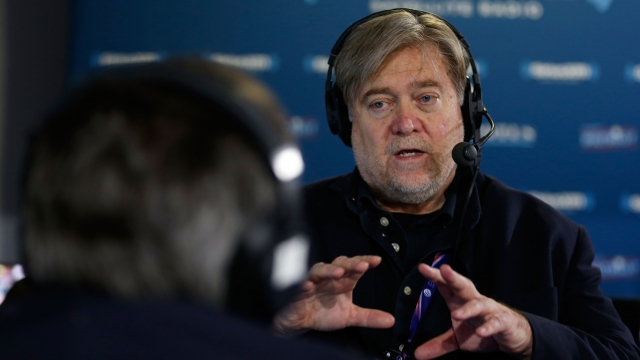 Donald Trump's new campaign CEO is under fire again. This time for anti-Semitic comments he supposedly made in the '90s during a legal battle with his ex-wife over where his children should go to school.

This is the latest controversy involving Stephen K. Bannon since he joined the Trump campaign last week.

SEE MORE: Donald Trump Has Made Some Big Changes To His Campaign Staff ... Again

According to court documents obtained by New York Daily News, the ex-wife claimed Bannon "said that he doesn't like the way they raise their kids to be 'whiny brats' and that he didn't want the girls going to school with Jews."

Hours earlier, news broke that Bannon was charged in a 1996 for domestic violence involving his then-wife. According to Politico, which obtained the police report, he was accused of grabbing his wife by the wrist and neck and smashing the phone she was using to call police. A responding officer reported seeing marks on the woman's neck and wrist.

Bannon pleaded not guilty, but the case was dismissed because prosecutors couldn't find the key witness — his wife.

According to NBC, the now ex-wife said Bannon's attorney told her to leave town so she couldn't testify, though the attorney has denied that claim.

Trump's hiring of Bannon, chair of Breitbart News, has been widely criticized.

SEE MORE: The Trump Campaign Is Making Changes, But Will They Stick?

SEE MORE: Paul Manafort's Past Political Work In Ukraine Might Be Illegal

And Paul Manafort resigned last week as campaign chairman after several of his controversial ties to Russia surfaced.