Trump, Bill Clinton Conversation Must Have Been Interesting 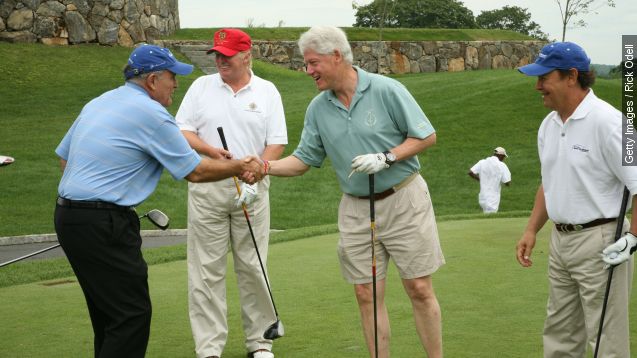 It's come to light that these two – Donald Trump and Bill Clinton – had a phone conversation somewhat recently.

Doesn't sound like a big deal, right? Well, throw in the fact that both the former president's spouse, Hillary Clinton, and The Donald are presidential hopefuls, and things get a little more interesting.

The Washington Post got the scoop after talking to four unnamed Trump associates and a Clinton aide.

According to the Post, the private conversation took place sometime in late May, before Trump announced his presidential bid.

There aren't too many details on the call, though the Post reports Trump's political ambitions did come up. According to the Post's sources, Clinton was encouraging during the talk but never urged Trump to run.

"You know, he has been, believe it or not, uncommonly nice to Hillary and me," Clinton told Jon Stewart during a "Daily Show" episode earlier this year.

Running on the GOP ticket puts Trump in a peculiar position with the Clintons.

While he has donated to their foundation, and even had them at his third wedding in 2005, his entry into the presidential race and recent inflammatory remarks about immigration have put him at odds with Hillary Clinton.